Woven Skull (alongside an extended family of guests and collaborators) explore the limits of repetition, minimal instrumentation and free improvisation that stretches the breadth between delicate silences and harsh cacophony with continuously retaining traditional elements of song and musicality. Their second album proper will be out on Oaken Palace Records on 2nd November, and pre-orders are live now!

You can now stream the track “The Severed Ladies Of Dehli Parade Pt.1” in full here, and pre-order the standard edition (500 copies on 140g black virgin vinyl in sustainable sleeve) on Bandcamp or in the Oaken Palace Webshop.

As usual, we are also offering a very limited special edition of just 10 hand-numbered test pressings on 140g black virgin vinyl, housed in hand-assembled card sleeves with alternative cover artwork by Wired To The Moon.

The wait is over – finally we are ready to share with you one of our most anticipated releases to date! After 2014’s “From The Ming Oracle”, Louise Landes Levi returns with her new album IKIRU or The Wanderer, on which she takes the listener on a journey through the life and fate of the Monarch butterfly. Louise is joined by Bart De Paepe and Timo van Luijk, who also recorded and mixed the album.

IKIRU, which is Japanese for “to heal”, starts with “Butterfly Graveyard”, a musical assessment of the current state of the Monarch butterfly, whose population has declined by over 80% over the past 20 years. On “Butterfly Brain”, this worrying development is contrasted with the bravery and wonder of the species, its transformation from a caterpillar to a butterfly, which then travels thousands of miles on its journeys from the US to Mexico.

You can now stream the first track “Butterfly Graveyard” in full here, and pre-order the standard edition (300 copies on 140g white vinyl in rough uncoated sleeves with Ira Cohen poem as insert) on Bandcamp and in the Oaken Palace Webshop.

All profits from this release will be donated to the Monarch Butterfly Conservation Fund initiated by the US National Fish and Wildlife Foundation.

A book, Mysticism, Ritual and Religion in Drone Metal by Oaken Palace trustee and doctor of drone Owen Coggins is published on 25th January by Bloomsbury Academic.

Based on several years of research about how audiences understand and respond to religious sounds and symbols in drone metal, the book explores how ideas of mysticism and religious experience in drone metal relate to similar discussions around dub reggae and psytrance, and describes how the marginal status of drone metal in relation to other metal and experimental musics allows an emphasis on listener experience in constructing genre. Then a chapter discusses the prevalence of the themes of pilgrimage and imaginary ‘elsewheres’ in how people describe listening to drone metal, before arguing that it is the first form of metal (or popular music for that matter) where the amplifier is the most important instrument, more central even than the electric guitar. This is then related to other amplifications and distortions, for example in heavy gothic lettering favoured by many metal bands, which can also be associated with mysticism and arcane or archaic ritual.

Including discussion of Oaken Palace bands Nadja and Phurpa, the book features in-depth research relating to other bands likely well-known to our supporters, such as Earth, Gravetemple, Bong, SunnO))), Om and Sleep. In writing the Expert Report for the Charities Commission supporting Oaken Palace’s (successful) application to become a charity back in 2012, Owen mentioned some important aspects of drone music, drawing together perhaps some elements common to the construction of mysticism in drone metal and the commitment to environmental awareness in the label’s activities:

“the requirement of attentive listening to appreciate the long-form pieces; the minimalist structure and slow pace of the music encouraging or demanding more active, imaginative participation in musical experience; a holistic intellectual and physical response to the music which promotes self-reflection, and even usage in meditative and contemplative practices”.

Order HERE, or request that your library get hold of a copy! 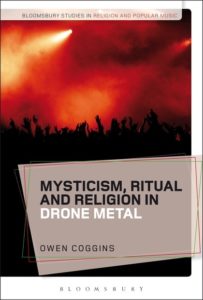 Phurpa return with two massive releases on Oaken Palace Records – more than 3 hours of material spread over a double LP and a super-long cassette tape.

The vinyl album (get it here) is a beautiful tapestry of ancient sounds, with varied passages of communal vocals complemented with singing bowl, rattle and traditional drums, over the faint organic hum of the ritual space.

The cassette (get it here) presents an astounding extended mantra, a single recording lasting one hour and forty-four minutes, on specially extended C105 cassette. These releases together comprise a staggering dark mass of ritual drone, austere but richly dense, relentless but profoundly meditative. 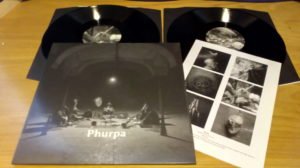 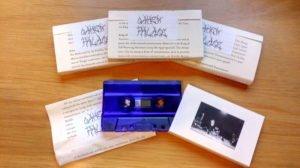 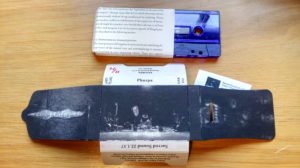 We are thrilled to announce that Bön-mystics Phurpa will release their next ritual on vinyl via our new Oaken Palace Black Series! Their album will be dedicated to the Amur leopard, the most endangered big cat on this planet, with only 70 individuals remaining in the wild. All profits will be donated to the Amur Leopard & Tiger Alliance (ALTA).

By now, Phurpa no longer need a lengthy introduction. After the release of their first double-LP “Trowo Phurnag Ceremony” on O’Malley’s label Ideologic Organ, the Russian artists have recorded several of their rituals of ancient Tibet, supported Sunn O))) on tour, and played several obscure festivals.

Phurpa will record their Oaken Palace debut this weekend, and we expect to get it submitted to the pressing plant fairly soon. Stay tuned for updates and previews!

We are delighted to announce the first new release in 2017, which will take us back to the roots of Drone music. We welcome Louise Landes Levi to the Oaken Palace Records family and invite you to join her in the exploration of traditional Indian raga!

Louise is a founding member of  Daniel Moore’s Floating Lotus Magic Opera Company, the first fusion orchestra in the USA – fellow players included Terry Riley & Angus Macleise. Louise then trained with  the Indian masters Pandit Ram Narayan and Ustad Abdul Majid Khan on sarangi, and with Ali Akbar Khan and his sister, Annapurna Devi. She also  studied with La Monte Young  in NYC, where she monitored the Dream House, Young’s & Zazeela’s musical installation. Despite this vast musical experience, she has released very few solo recordings, so we feel especially honoured that she has agreed to contribute to our project.

We will release this new material as a limited LP (300 copies on white vinyl) that will follow her only and now sold-out LP “From The Ming Oracle”. More info on the album and the cause she will be supporting will follow soon. In the meantime, you can listen to an excerpt from her last album here:

And here you can find her two previous tape releases “Kinnari” and “Padma”:

A few weeks ago we were approached by Seb from My Claim Solved, who offered us an annual contribution to running Oaken Palace Records as part of their corporate social responsibility scheme.

Looking at the impressive list of other environmental and charitable organisations that are being supported by My Claim Solved, including Bristol Zoo Gardens, Edinburgh Zoo, Paignton Zoo SOS Club, and the Queen Elizabeth Hospital Birmingham, we gladly accepted this offer and are welcoming Seb and all other employees of My Claim Solved as new members of the Oaken Palace family!

2016 is almost over – considering the many not-so-nice things that happened this year, we can imagine that many of you can’t wait to call it a year and move on. Even more important to end the year with some great news, then!

For Oaken Palace Records, 2016 has been the best year since we released our first LP in 2013. We put out just two new releases this year – our second and now almost sold-out tape, the Spliff Tape by our Belgian Psych-buddies Hellvete and Bear Bones, Lay Low, and Kakapo, the first solo-LP by Noise mastermind Merzbow – and both have been received very well by both fans and critics. In the meantime, people still showed interest in our earlier releases, many of which are now close to being sold out.

This brings our total donation count to just under £9,000 – £8,991.04, to be exact – and means that next year we will surely crack the magical £10,000 mark – something I (and probably nobody else, for that matter) would have expected when I started this project. Just think of all the beautiful animals – polar bears, the ground squirrel, dolphins, orcas, orang-utans, insects, the Aye-aye, the Flores hawk-eagle, the Radiated tortoise, and of course kakapos – that benefitted from YOU enjoying great Drone and Psychedelic music in its various shades, and all the artists who selflessly contributed their music to this project!

Oaken Palace Records has always been a DIY label, and it will continue to be one in the future. So a big THANK YOU goes out to all the people who helped out with creating artwork, designing our new logo, translating stuff into Japanese, etc. – and of course to Owen, my new label-partner. Without his support, I would have had to quit all label activities at the beginning of this year. Instead, Oaken Palace Records is now doing better than ever!

We have big plans for 2017! So, as always, stay tuned and spread the word. For now, we wish you a good start into the new year, and everything you wish for yourself!

All the best,
Sven & Owen