In The Lugubrious Silence Of Eternal Night 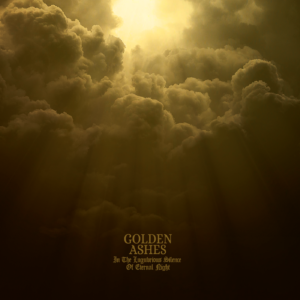 300 copies on 140g ultraclear vinyl, housed in a 100% sustainable card sleeve. An additional 20 test pressing copies on black vinyl, housed in hand-crafted sleeves with alternative artwork, are available exclusively on this website. Both editions come with a free download code.

GOLDEN ASHES burst forth from the womb of time eternal in 2018 with The Desolation EP. Although an otherwise-new entity at the time, GOLDEN ASHES was another creative face of the incredibly prolific Maurice de Jong, largely known for Gnaw Their Tongues, but operating under a vast number of guises, each one as provocative as the next. While black metal has always remained an undercurrent in Gnaw Their Tongues for Maurice to malform to his own challenging design, more strictly “black metal” expressions of his have largely been relegated to De Magia Veterum, Cloak of Altering, Hagetisse, Caput Mortuum, and Pyriphlegeton among many others – all ranging a spectrum from avant-garde to primitivist. As such, then, GOLDEN ASHES exists as an outlet for Maurice to explore a more symphonic sort of black metal…but as always, with his own uniquely (and uniquely bent) touch.

Following that first EP came the full-length Gold Are the Ashes of the Restorer, during the spring of 2019. The title itself suggested a unique take on familiar black metal themes, and the music duly followed suit: recognizably atmospheric/synth-inclined black metal, but with a blitzed sensibility that was unmistakably the work of Maurice. An EP tellingly titled The Golden Path of Death Acceptance followed at the end of 2019, drawing the year to a close and expounding upon the illumination he laid forth as GOLDEN ASHES. The climax of that creation now arrives with In the Lugubrious Silence of Eternal Night.

Like a blazingly brilliant storm of sunlight racing around / reverberating across an empty castle, In the Lugubrious Silence of Eternal Night recasts black metal tropes in deceptively beautiful, breathtaking ways. Maurice’s foremost weapon here as GOLDEN ASHES is his arsenal of synths, layering them in a most labyrinthine manner but most importantly with an ear for medieval melody, of somber splendor writ large and even lysergic. This literal wall of snyths immediately evokes Black Metal Metal Sensations, with the onslaught of glass-shard riffing and blizzard-blown drumming swirling all about in overwhelming fashion. But peer even faintly (but preferably deeply) into that majestic maelstrom and one will find solace, repose, even a sort of serenity. Horrific may be the means on the very surface, but GOLDEN ASHES’ In the Lugubrious Silence of Eternal Night provocatively posits that within madness can wondrous transformations take place. Drown thyself within, and rise to the surface reborn and beyond…

In the Lugubrious Silence of Eternal Night is dedicated to the Hooded Vulture (Necrosyrtes monachus), which had already been rated as “critically endangered” by the IUCN in their assessment of 2017, before a mass poisoning happened in Guinea-Bissau in March 2020, bringing this species to the brink of extinction. You can read more about the poisoning here. All proceeds from LP sales will be donated to its conservation and protection.